Michael started playing guitar in Westchester County at the age of 13 and was quite proficient by age 15. He studied guitar with George Thorne and Billy Bauer. In his second year of High School his family moved to Manhassett Long Island where he had a trio called The Motions. This evolved into several top forty cover bands which eventually played all over Long Island during the sixties and the seventies in so many famous Long Island Clubs.One of the groups was called "Michael" and another popular Long Island group was Grand Blvd.

As an aside Michael had the pleasure of singing with The Islanders a Doo Wop acappella group who recorded on Relic Records. After that the group signed with Gino Moretti on a subsidiary of MGM records and had a chart hit with" Where The Lights are Bright"

In the seventies Michael co produced a disco album called Dance City with Steve Adorno now of Seguida. The lead tune Dance City was played in Disco's all over the country and became a solid dance hit in Discos such as Studio 54 in NY and Fire and Ice in New Jersey. It was recorded at Media Sound in NY with the help of recording engineer Phil Shrago.

Michael owes much thanx to Lucibelle Anderson his vocal coach from Redding Ct who taught him how to increase his range and breathe. The voice is like any other muscle in the body. Use it or lose it. Chuckle.

Michael went on to sing with several popular Doo Wop groups such as Vito and The Salutations, and George Galfo's Mystics. Michaels group Harmony Street a wonderful group consisting of Mike Miller, Ellen Pacelli, Dee Hearvrin, Robin Miller, Scott Poarch, and Larry Giacobbe was one of the leading new Doo Wop groups of the Modern Era. They appeard on so may popular compelation CD's as well as many of their own. Their latest CD is on Collectables Records called "Harmony Street Doo Wop and More". Harmony Street appeared at the White House several times, the most memorable being the Christmas Party in '98 for the Clintons with 800 guests. They sang the Anthem in many major venues including Shea Stadium, Yankee Stadium and were the entertainment for Tom Ridge at the Waldorf Astoria when he was sworn in as the first Homeland Security Director as Charles Schweiker took his place as Goveronor of Pennsylvania.

Ordinary Love Affair is the closing song on his Michael and The Dreams CD in which Michael plays the music, sings all the back up harmony and leads. It is a project which he is very proud of. Michael. Mike's Harmony Street tune has appeared on many compilation CD's and can be heard on Mickey B's closing tune on his Vol 2 CD as the closing song.

Mike can be heard on his radio show, The Harmony Street Show which is a syndicated interview show. Mike now sings with Amanda Cohen as Harmony Street. He has also a group consisting of heavyweight singers, Joel Starr, Joe Neary and Lenny Citrin, who back up lead singers of Hit groups when they come to town.

written and sung by Mike Miller and George Galfo's Mystics

Here are some Michael Tunes

This I Swear Is True

In 1965 The Islanders consited of

Mike Miller, Tom Giacalone, Jimmy Hanley and Howie Maher. We were a very tight doo wop acappella group that also recorded for Relic Records. Jimmy Ponticelli was originally in the group as well. This tune was recorded for GMC Records and MGM subsidiary. Geno Moretti President. " Baby Pack On" was written by Ray Ceroni of The Bell Notes. The flip side was " Where The Lights Are Bright" which was picked in Billlboard Mag, to be a hit with a Bullet. It fizzled but Kind of A Drag by The Buckinghams picked with a bullet the same week went to number ONE. We were young and the guys didnt want to try again. We cut 6 sides that day. I wonder who has the Masters

I recently found that "Baby Pack On" by my group The Islanders was considered a collectors item and was priced over $100 by collectors. They wrote this commentary:

This is no ordinary piece of Blue-Eyed Northern Soul, this rare outing is peppered with attitude riding on a strong production, so strong you tend to forget the vocals may not be black. We like this, and we believe it’s rare. 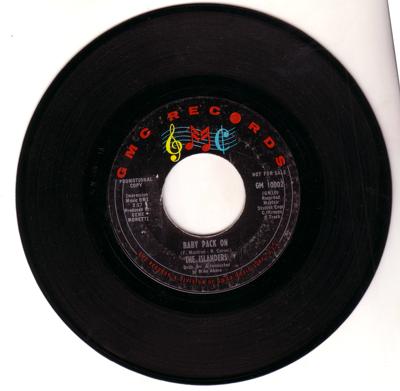